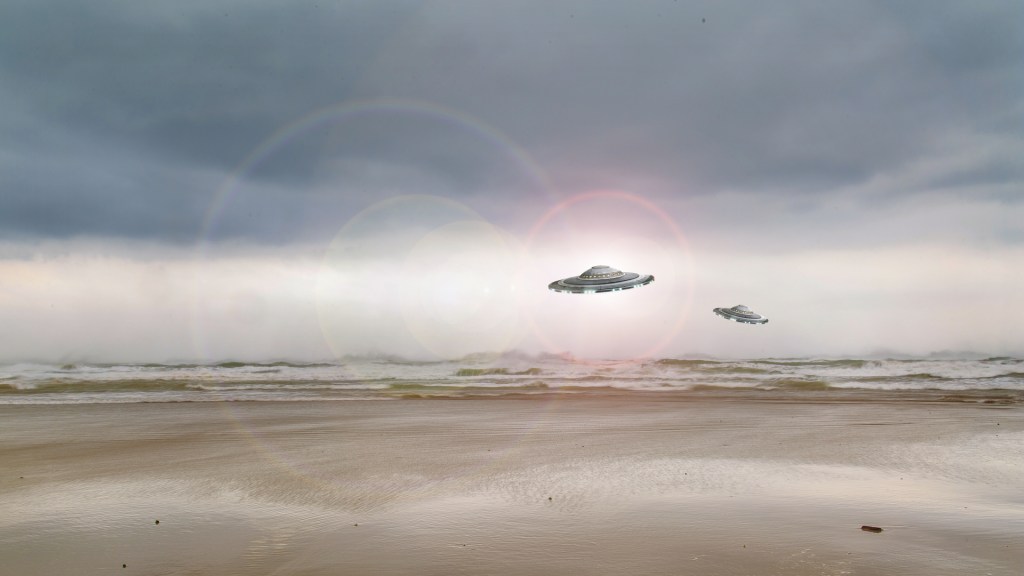 June, 1947 – Skies Over The American Southwest

“They’re still out of range,” called Lt. Wright. “I can’t get a weapons lock!”

Cmdr. Mori didn’t respond as their shuttle raced across the skies high over Arizona. Nearly 20 kilometers ahead of them another craft rocketed skyward. Their eastward course would soon take them over New Mexico. Far behind the chase, a pair of Army Air Forces fighter jets pursued. They had tried to intercept the shuttles over central Arizona. There would need to be a cover-up, but being seen by “civilians” was the least of the shuttle crew’s worries right now. They were in a pursuit of their own, one they had to win no matter what.

The craft they were pursuing was an alien scout for a large band of pirate raiders that had threatened Earth’s colonies and shipping for years. Only the presence of the Confederation warships had kept them at bay. Unfortunately, the ‘Fed warships had been called home to fight a war of their own. The Earth Protectorate was left with only an old Confederation light cruiser and a dozen of their own armed shuttles for protection. The Protectorate’s first military shipyard was under construction in the Alpha-Centauri system, but production of their first real warship was still at least 3 years off.

Technically, the cruiser didn’t “exist”. The ship had been too old to make the journey back across the galaxy to Confederation space. When the ‘Fed mission commander had been ordered to bring her ships back home, she’d been ordered to destroy the old cruiser before departing, lest their technology fall into “the wrong hands”. Knowing the precarious state of the Protectorate, however, she had ignored the order and instead handed the cruiser over to the Protectorate’s tiny security force, the PSF.

Even with the ‘Fed ship, however, the PSF didn’t have the resources to protect all 5 planetary systems. In an effort to keep that information secret, the cruiser and 7 of their shuttles had been racing from system to system and up and down the shipping lanes making appearances. The remaining 5 shuttles had been hidden, one each in the 5 star systems that made up the territory of the Earth Protectorate. Their job was to just watch for trouble and call for help if anything happened.

For 6 months they had run themselves ragged, but they managed to keep their true state hidden. Their foes, however, were beginning to get suspicious and the raiders had started to probe the Protectorate defenses.

This scout had managed to slip in and land undetected in the California mountains three weeks ago. During that time they’d managed to infiltrate the network of a PSF covert facility in Los Angeles. The result was that they’d discovered the truth about the state of the Protectorate defenses. The infiltrators had been detected while departing the facility, but were able to get back to their shuttle before the PSF shuttle could arrive. Now, the chase was on.

The cruiser was at the far end of the Protectorate, fending off a raider frigate that was probing that end of their territory. The distraction had allowed this raider scout to sneak into Protectorate space on this end and reach Earth. Now, it was trying to escape with what they had learned. If they escaped with that knowledge and reported back to their base, the raiders would attack in force and the PSF would be ravaged and pillaged for years to come. Only this one, lone PSF shuttle could stop it in time.

“Closing range,” called Wright a minute later. “But it isn’t fast enough. They’ll reach orbit before we can get close enough for weapons lock.” Their attack shuttle had a slight speed advantage in atmosphere, but the raider scout had gotten a head start on them.

Mori muttered something under his breath that was somewhere between cursing and praying for a miracle. “More time. We just need a little more time,” he finally said. He tried a few control adjustments to see if he could squeeze just a few more ounces of speed out of his engines, but he could tell it wouldn’t be enough.

“65 seconds to orbital clearance,” reported Wright. Once the scout reached that altitude, it could go to warp. At warp speed, they scout would quickly outrun the shuttle and get outside jamming range. At that point, it would be over. The raiders would know the truth and the Protectorate would fall, possibly forever.

They’d been lucky. The Protectorate and their ‘Fed protectors had placed a heavy signal jamming field around the Earth. It wouldn’t block anything as primitive and slow as radio, but you never knew what Earth’s scientists would come up with next. People here just weren’t ready to know the truth about the galaxy at large. If the raider scout had infiltrated its way onto any of the other Protectorate worlds, they could have signaled out the truth immediately. But because it was Earth, they had a chance to stop them.

“Take the helm,” called Mori. “I’ll take manual weapons control.” He immediately began shooting. The shuttle had only a single plasma beam weapon (p-beam) and a rack of 10 fairly primitive missiles. He toggled the missiles off one after the other. The weapons had virtually zero chance of hitting the raider, but they might not know that. They might be scared into making a mistake.

As the missiles streaked skyward after the raider, he began firing the p-beam over and over again. The two attacks combined had some of their intended effect. The raider began taking evasive action as a couple of the p-beam blasts struck against its energy shields.

“They’re still gaining altitude, but that’s bought us a couple of minutes or so,” called Wright as he kept adjusting their course to track the fleeing raider.

“Sensors are picking up an energy spike,” Mori began to say when suddenly the air in front of the shuttle filled with crackling energy as a p-beam blast from the raider struck against their shuttle’s shields. “Front shields down to 71% max. Divert power from the other shield arrays to compensate and keep us steady.”

Wright hit a few buttons on his control panel and the shields re-stabilized at 90% of maximum. More p-beam blasts struck against the shields, but Mori’s plan was working. Trading shield strength for distance, the shuttle was finally closing on the raider. He just wasn’t sure it was going to be enough.

For nearly a minute he kept up the p-beam fire, scoring a few hits on the alien scout as the range narrowed, but he finally came to understand it wasn’t going to be enough. Their own shields were collapsing and they hadn’t caused enough damage. In 10 seconds, the raider would be able to jump to warp and escape.

As he turned to his right, he saw that Wright had reached the same conclusion. His hand was poised over the warp drive controls as he turned to meet Mori’s gaze. They’d served together for more than 6 years and that brief eye contact communicated everything each needed to know. The alien scout was straightening out its course in order to jump to warp speed. If they lined up and made their own jump first, they would plow right through the scout, destroying both craft.

Lt. Wright double checked the course plot one last time and his finger hit the control.

Nearly a 100 kilometers below them, two Army Air Forces pilots watched as there was a sudden streak of light and the two specs suddenly merged together into an enormous explosion. Even from this distance their fighters shuddered a little from the small shockwave that reached them a few seconds later. They leveled their fighters off near their maximum operating altitude, watching as debris began raining down from the sky.