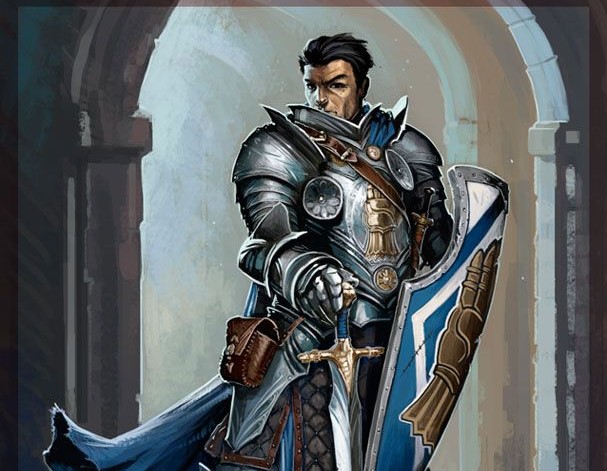 Terun is one of my all time favorite PCs to play. He was a human paladin of Helm, hero of Silverhall, warrior of the Wyrmfang Chronicles, and the endless butt of jokes about one-armed paladins.

Terun was the last of 4 brothers, sons of a noble family headed by Matrom Eastmore, a general serving in the Purple Dragons of Cormyr. It was expected that all sons of the Eastmore family would serve in the Dragons as soldiers or clerics. The two eldest brothers, Grahm and Reynold, each enlisted as they came of age. Delban did not, turning instead to his natural arcane talents and joining the Aes Saidarr and getting himself cast out of the family. Terun, though torn, followed his two brothers into the Dragons.

Once his basic training was completed, Terun was sent to the eastern borders to join his two brothers serve in the fortress that guards the road that crosses the Thunder Peaks into Sembia. For a few months, all was well. That is, until the day the patrol his two brothers were a part of failed to return.

As Terun prepared to ride for with the search party, a lone rider brought word that the patrol was pinned down by an raiding band of orcs. The reinforcements rode with haste, but arrived too late to save the patrol. With the thundering cavalry bearing down on them, the orcs quickly surrendered. But no mercy was granted and they were slaughtered.

Terun was granted leave to take the bodies of his brothers home. Once they were laid to rest, a disillusioned and despairing Terun did not return to his post. Instead he wandered for many months, drifting ever north and east.

Eventually, in the mountains north of Thar, he happened upon an ancient fortress inhabited by a small group of paladins and priests who served the god Helm. In this group, dedicated to stopping evil at any cost, Terun found a home and a purpose. Joining their order, Terun became a paladin of Helm.

His initiation completed, Terun was sent southward, to the Dalelands, to carry Helm’s will to that land. There he found and united with the heroes of Silverhall, electing to grant Helm’s service to the Silver Queen.

Terun fought valiantly with the heroes of Silverhall on many adventures. In one particular fateful day, Terun was turned to stone by the power of a vile beholder beast. His stone left arm, holding fast to an item that their enemies coveted, was ripped from him in effort to obtain that item. Restored to flesh once more, his arm was lost.

Terun, instead of seeing the loss of his left arm as a hindrance, saw it only as a test from his god. He was determined to persevere in the face of that challenge. On rare occasion, he was weak and complained of his state. Mostly, though, he fought valiantly with the heroes for many more adventures.

Not all was well though. Terun and the Heroes parted ways for a time. He became frustrated that his companions were unwilling to do what it takes to defeat evil. Evil, in all its forms, should be destroyed at all costs. Why couldn’t they see that? And so, in frustration, he left their weakness behind and struck out on his own, following the will of Helm wherever it led.

Eventually, older and wiser and perhaps a bit more patient, he was led back to Silverhall and joined the heroes once more.

Then came the day of Terun’s death. Working to clear a fortress of evil creatures, Terun and the Heroes came upon a trap. A hidden portcullis fell from the ceiling, separating Terun from the others. While the rest of the party tried to raise the bars, Terun decided to scout ahead and see if perhaps there was a way around.

Note: It should be said that my characters have a tendency to wander off or do something when I get bored of waiting for the others to argue about something or decipher a puzzle (I HATE RIDDLES), or pack the horses or whatever. It’s gotten a few of my characters into trouble over the years, but only once has it caused them to die. This was that time. What can I say? I’m a man of action, not words.

Unfortunately for Terun, he ran into a band of gnoll rangers. Pinned down by arrow fire, he tried to take cover and wait for help. It didn’t work. His companions were too slow getting past the portcullis trap and Terun fell.

Eventually, Terun’s body was returned to his family and interred in the family crypt outside of Suzail. There, his brother Delban, now following the path of evil, stole the body and entrapped the soul of Terun in a gem he had attached to a stolen ba’athril axe. It was all a part of his plot to lure the party westward to Brindinford and get them to eliminate an illithid threat to his domination of the city. (See: The Speaker In Dreams)

The postscript of that adventure was that Terun was restored to life, as well as his left arm. There, he swore to join his father and a band of outcast Purple Dragons who had fled the Black Talon takeover of Cormyr, in defending Brindinford from an approaching army of Talons bent on capturing or killing all the remaining Dragons.

With the help of Delban, that threat was dealt with and Brindinford was once more safe. Now, Terun feels the calling of Helm once more. Perhaps the Heroes of Silverhall have not seen the last of Terun Eastmore.