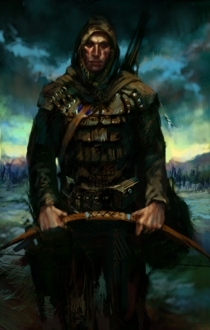 Khorzhad is a half-elven ranger. Caught between two worlds, both of which hate him, he decided to hate them all back. He was a secondary character for a while, from a time when we were running both a main character and then a background character a few levels below the main characters.

He has nearly died on any number of occasions. His hatred of all things makes him reckless. Some think he’s trying to end his own existence through battle. Some hope he succeeds. When the companions found a home for a time, he took up a role as leader of the city’s scouts. They would explore the surrounding countryside watching for enemies and providing early warning of impending attacks.

Eventually the time came for the companions to travel westward in goal of destroying the Wyrmfang and ba’althrils. They eventually found themselves in Evereska where the Wyrmfang and some of the ba’althrils were stolen. (DAMN YOU TURIMBAR!!). Khorzhad pursued and was once again knocked down to near death as Turimbar escaped into the Underdark.

While Khorzhad initially was going to join those in pursuit into the Underdark, it was deemed more advisable that another go instead. Khorzhad currently waits in Evereska with those others guarding the ba’althrils they recovered. They await the return of the companions who ventured into the Underdark pursuing the Wyrmfang.