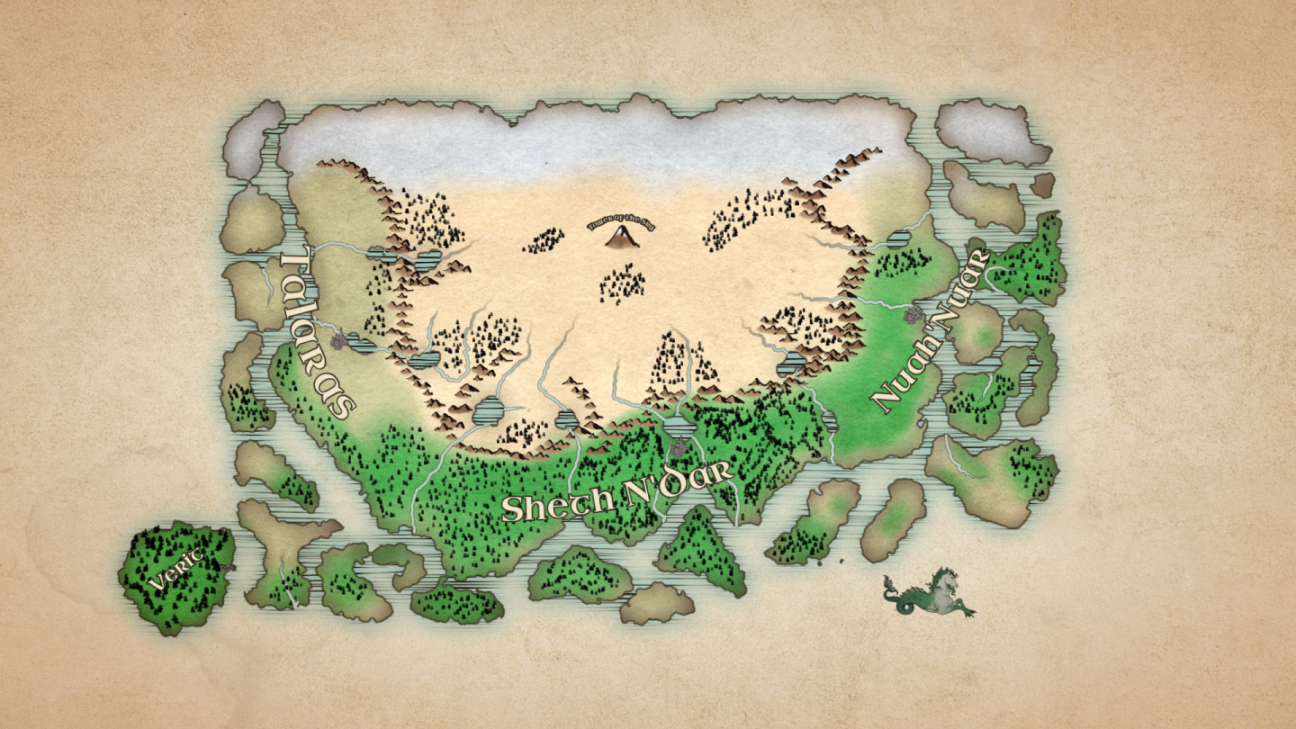 The history of the new world can be divided into two phases. There is the time of the great exploration. For thousands of years after the continent was discovered, travelers came across the sea from the other three continents, each settling lands according to their people. Smaller kingdoms come and go, but four great kingdoms prevail in the east, west, south and center of the continent.

The second phase comes after a great disaster that laid waste to the entire continent. Mountain ranges raised up around the center, cutting off access to the inner half of the continent. New islands raised up all around the outside. New kingdoms arose among the survivors that have stood to this day.

The Great Kingdoms of the Past

Wars came and went between the main kingdoms, and loyalties of the smaller kingdoms shifted over time as such things do. This was also a time when the pantheons of the gods were as full as typical for a fantasy world.

For thousands of years this was the status quo. Then things changed. It was the clerics who noticed it first, of course. One by one gods began to go suddenly silent, never to be heard from again. As each went silent, the power of their clerics faded over the next few years and their faith’s collapsed.

It was perhaps 30 years after the gods started going silent that only a dozen or so of them remained. At that point the peoples of the world finally learned that a great civil war was raging across the heavens and the gods were dying in battle with each other. This was when the great kingdoms began to collapse.

In the decades that followed, distrust between the followers of each faith caused the borders of the kingdoms to slowly disintegrate. Over that time several more of the gods died. As each god died, the loyalties of their followers would shift among the the remaining gods.

When only 6 remained, they gathered all their remaining forces for one final battle in the heavens. The battle raged for years and the peoples of the world waiting with trepidation for the result and see what remains. Then came the moment that the new gods struck.

The cause of the civil war was never revealed to the peoples of the world but there are those who believe that (usually quietly to themselves) that the new gods instigated it in order to seize control of this world.

An unfortunate side effect of the final battle was a cataclysm that laid waste and fractured the continent. The entire geography changed. All the remaining existing kingdoms ceased to exist. Almost all contact with the inner continent is now hidden behind nearly impassible mountain ranges. This cataclysm of the new world caused tidal waves that decimated the coastlines of the other three continents. With virtually every port and shipyard destroyed on all four continents, the new world was cut off the old for centuries.

As the survivors began to rebuild their lives, racial divides mostly ceased to exist as survival became the sole concern for all. A few survivors from the interior migrated to the coasts, bringing stories of destruction and hordes of strange creatures.

With this destruction, the people knew that their last few gods were gone. However, there soon came among the survivors new clerics, speaking of three new gods.

Over the 1000 years since the cataclysm, new civilizations have arisen. Three great kingdoms now occupy the eastern, western and southern lands. Contact and trade with the old world has been reestablished. From time to time, explorers and settlers venture into the interior of the continent, but no settlements ever survive more than a few years.

The culture is dominated by the three new gods. They tolerate no other faiths to any great extent. From time to time some try to revive worship of one of the older gods or some other god from another world. Whenever they gain any traction, however, the three call a “great purge” and the followers of these would be usurpers are killed or converted back to the true faiths.

These are days of high adventure. While great cities exist throughout the outer lands, much remains unexplored, even in the outer kingdoms. Those few who have survived venturing into the interior bring tales of ruins and strange creatures. Perhaps a few brave adventurers have what it takes to explore it.