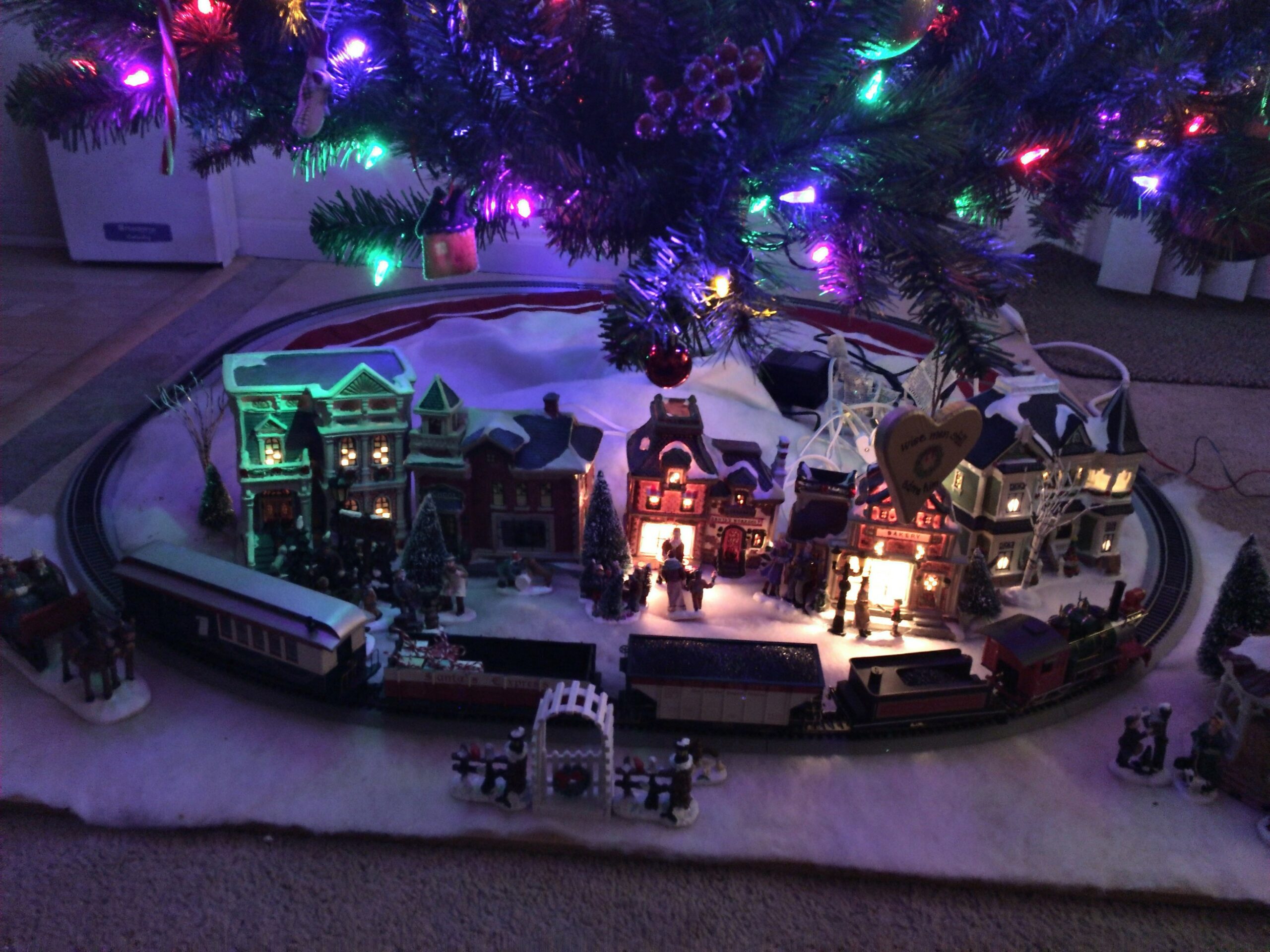 It’s the holiday season and for many it’s a time to put up a tree with lights and ornaments and presents. One way to add to the enjoyment of your Christmas tree is to put a train around it. This is one area where the pre-packaged train sets really shine. Whether it’s a Santa themed train, the Polar Express, or just a normal train set, adding a train around the tree is great fun.

Floor Considerations
One thing you should avoid doing is running a model train on carpeted floors. The carpet fibers will get pulled up into the wheels and motors and ruin them over time. Soft carpet will also tend to give as the train passes over it, causing the track to flex a bit. Over time this can cause the track pieces to separate and the train to derail. So if it’s a carpet floor, put down a sheet of plywood or other flat, hard surface before you add the tree and train.

A rule I generally follow is to determine how big a sheet of plywood I need for the train set and then divide it in half. I will put down two sheets of plywood with a gap of about three inches between them. This will let me run the extension cord(s) for the lights and village set under the tracks to the wall outlet without causing problems with either track or cords.

Scale Considerations
The standard is generally O scale or Lionel, but you can go smaller to HO scale or larger to G scale according to your preference and available space. Another popular scale for these trains is called On30. Basically, On30 is O scale trains running on HO gauge track. So the locomotives and cars are approximately 1:48 scale, just like O scale trains, but they are typically narrow gauge styles, so they run on a narrower track that’s the same size as HO scale standard track. My train set is an On30 set made by Bachmann. While the set I have is no longer in production, one of their current equivalents is the Norman Rockwell’s American Christmas Ready To Run Electric Train Set.

A final note on train sets. Avoid battery powered sets entirely. Even the ones made by a more reputable manufacturer like Lionel or Bachmann are extremely cheap in quality and will be unlikely to last through even one holiday season. While the electric sets are more expensive, running $200 and up, they are worth it. If you take care of them they will give you years of lasting enjoyment.

To Village To Not To Village
One of the great aspects of choosing one of the O scale train sets (O, On30 or Lionel), is that the scale works quite well with most of the standard Christmas village ceramic sets. You can generally find these in most stores that carry holiday decorations. One of the more popular brands are the Department 56 village items that you can find places like Amazon. Most of my pieces I picked up locally at Home Depot or Meijer.

But the question is whether or not you want to have one at all? As always, that’s up to your preference. Personally, I enjoy having a place for my train to stop and people to wave as it passes. It makes the whole scene more enjoyable. I know the buildings and figures can get pretty expensive

What About Kids and Pets?
The short answer is: it depends. The way I tell people to approach it is this. Do you trust your child or pet to have glass ornaments within their reach on the tree? If you trust them with the glass ornaments, trust them with the trains. Kids vary wildly, but I generally think around 5-6 years of age they are responsible enough if you can patiently explain to them how to treat the trains. The Lionel trains can generally stand up to a little more abuse. In general, though, remember that model trains are not really toys. They aren’t build to be banged together like toy trucks or cars.

As far as pets go, in my experience most indoor pets will either keep well away from the trains, or ignore their presence. When I was a kid, though, I do remember one cat that would sometimes take a swipe at the train as it ran. Sometimes she’d plop down on the tracks and refuse to budge as well, even when the train would run into her. But in general all the others have been fine over the years.

A train around the tree is a lot of fun for kids and adults. It’s a great way to enjoy the hobby at least part of the year.