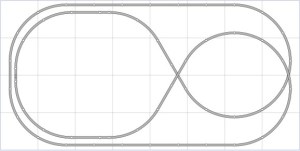 Once you’ve decided on which scale you’re going to model in, the next step is to start thinking about your track plan. In order to do this you first need to decide the space you’re going to work in initially. If you haven’t done anything with model railroading before, it’s important to start small.

For example, if you’re going to work with HO scale and decide that you are going to use half of your basement for your railroad, don’t make that your initial plan. Instead, get a sheet of 4’x6′ or 4’x8′ plywood and start with that instead. While your eventual empire can be as big as you want or are able to build, you first need to start small and develop the skills you will be using as it progresses.

There are, no matter how complex or not the eventual layout is, a few standard patterns for model railroad plans. Let’s go over each of those patterns.

Basic Oval
This is the basic pattern you will usually get with the boxed toy sets you buy at the toy store around the holiday season. Aside from a straight piece of track, It’s the simplest pattern you can implement. It’s easy to get up and running and works great for situations where you just want to let the train run without interruption.

There are two variations on the basic oval for some variety. The first is a Figure-8. This one is just like it sounds and has a crossover around the middle. The crossover may be on the same level, or you can combine it with ramps or risers and use a bridge for the crossover.

The second variation is an Overlapping Loop, also called a Twice-Around Loop. This one is sort of like the Figure-8, but the crossover is usually more towards one corner rather than in the middle. As with the Figure-8, this can be on the same level or a bridge crossover.

Dogbone
The Dogbone pattern looks sort of like an extended oval. It will have a loop at each end of the pattern and single or dual track between. This pattern can often be folded over and overlapping.

This pattern consists of track that goes from one end to the other without a constant loop. Sometimes it will consist of a loop on one end, so that the starting and ending point are the same.

Making It More Interesting
While the basic patterns are fine, they can get boring pretty quickly. Next time we’ll show you how to make things a bit more interesting.