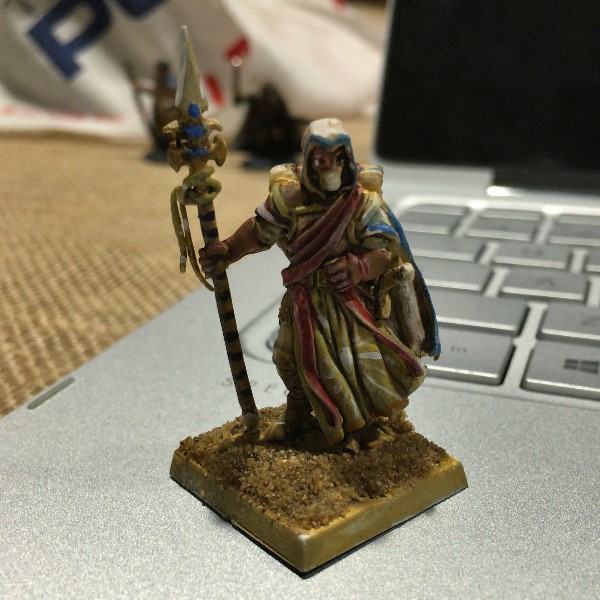 I’ll start with my current character because he’s the freshest in my memory. A year or two ago, we decided to move our ongoing campaign from Faerun to Golarion. The current arc is based in the deserts of Osirion, running through the Mummy’s Mask and related modules.

Qen is a Suli cleric of Ra, the old god of law and justice. He’s descended from the djinn mistress of an ancient pharaoh of Osirion. Which one exactly his mother has declined to share with him. Qen rather believes the true identity has long been lost to passage of time.

His ancestors have always been loyal and faithful to the old gods, worshiping as they may in secret and dismissing the current pantheons as pretenders and usurpers. Once Qen completed his training, after many days of meditation in the desert, he came to the belief that it was time to restore the faith of the lost gods.

Leaving behind his mother and sisters in Sothis, he followed the guidance of Ra. Soon he found himself in the city of Wati, at the crook of the Asp and Sphinx rivers. There he began teaching among the poor and destitute of that ancient city. While his upbringing among the merchant classes of Sothis would be termed middle class, he holds no wealth himself.

In Wati, he quickly learned to despise those of the wealthy classes. He saw them abandoning their moral obligations to aid those in need in favor of their own comfortable lifestyles and protections. He began to lay plans for the eventual overthrow of that city’s corrupt government, beginning with bringing organization to the street gangs of the docks district.

While he gathered some followers to the true faith, there came a day which changed his path. It was announced that the pretender pharaoh was opening the walls ancient burial grounds of the Necropolis to adventurers. Seeing an opportunity to possibly find ancient relics of the true gods, Qen joined himself to a band of adventurers and went with them into the Necropolis. During those forays into the Necropolis, the band found a mask that held a part of the soul of an ancient ruler called the Sky Pharaoh. Thus began the adventures that have brought him to where he is now.

From Wati, the adventurers were led to Tephu. There they spent many a day wandering and studying within the ancient libraries of that city. And from there, they set out for Ipec and the deserts beyond. The party is pursued by a band of cultists seeking to restore the Sky Pharaoh to life and rule. Currently, the band is wandering the sands of the Parched Dunes. They seek the secrets needed to lay the spirit of the Sky Pharaoh to rest once and for all.

Qen firmly follows the path of Ra, being a lawful neutral cleric that epitomizes everything the true faith of Ra stands for, especially the rule of justice and order. While he accepts the flaws of his companions, he has no compunction about turning one of them over to the proper authorities should their actions warrant arrest.

Everywhere he has gone, Qen has left behind a few souls brought to true enlightenment. Qen seeks not gain for himself. Much of his earned treasure has gone to building up the true faith and bringing justice to all. He looks forward to the day when the pharaoh of Osirion is brought back to the true gods. Failing that, he has no problem with replacing the pharaoh with a true believer.